Would you like to switch to the accessible version of this site?

Don't need the accessible version of this site?

The Romans and Greeks knew about diabetes. Fortunately, the way they tested for the condition - by tasting the urine - has long since passed. By testing the urine this way the Romans discovered that the urine of some people was mellitus, the Latin word for sweet. The Greeks noticed that when people with sweet urine drank, the fluids came out in the urine almost as fast as they went into the mouth, like a siphon. They called this by the Greek word for siphon - diabetes. This is the origin of the modern word for the disease - diabetes mellitus.

The sweetness of the urine come from glucose, also known as blood sugar.

This hormone called insulin finely controls the level of glucose in your blood. A hormone is a chemical substance made in one part of the body that travels (usually through the bloodstream) to a distant part of the body where it performs its work. In the case of insulin, that work is to act like a key to open the inside of a cell, such as muscle, fat, or other cells, so that glucose can enter. If glucose can't enter the cell, it can provide no energy to the body.

Insulin is essential for growth. In addition to providing the key to entry of glucose into the cell, scientists consider insulin the builder hormone. It enables fat and muscles to form, it promotes storage of glucose in a form called glycogen for use when fuel is not coming in. It blocks the breakdown of protein. Without insulin, you do not survive for long.

Your glucose starts to rise in your blood when insulin is either not present in sufficient quantity or is not working effectively. Once your glucose rises too high, glucose begins to spill into the urine and make it sweet. Up to that point, the kidney, the filter for the blood, is able to extract the glucose before it enters your urine. It is the loss of glucose into the urine that leads to many of the short-term complications of diabetes.

Diabetes Mellitus is a disease in which the pancreas produces little or no insulin. The condition may also develop if muscle, fat, and liver cells respond poorly to insulin. In people with diabetes, glucose levels build up in the blood and urine, causing excessive urination, thirst, hunger, and problems with fat and protein metabolism. Diabetes mellitus differs from the less common diabetes insipidus, which is caused by lack of the hormone vasopressin that controls the amount of urine secreted.

In the United States, about 16 million people (6 percent of the population) suffer from diabetes mellitus. Every year, about 800,000 people learn they have the disease. It is the seventh leading cause of all deaths in the United States.

In diabetes mellitus low insulin levels prevent cells from absorbing glucose. As a result, glucose builds up in the blood. When glucose-laden blood passes through the kidneys, the organs that removes blood impurities, the kidneys cannot absorb all of the excess glucose. This excess glucose spills into the urine, accompanied by water and electrolytes. This causes frequent urination to get rid of the additional water dra wn into the urine; excessive thirst to trigger replacement of lost water; and hunger to replace the glucose lost in urination. Additional symptoms may include blurred vision, dramatic weight loss, irritability, weakness and fatigue, and nausea and vomiting.

There are two major types of diabetes :

Type 1 - A disease in which the body does not produce any insulin or produces it only in very small quantities, most often occurring in children and young adults. Most people with type 1 diabetes must take daily insulin injections to stay alive. Type 1 diabetes accounts for 5 to 10 percent of diabetes.

Type 1 diabetes affects the metabolism of fat. Because the body cannot convert glucose into energy, it begins to break down stored fat for fuel.

Type 2 - A metabolic disorder resulting from the body's inability to make enough, or properly use, insulin. It is the most common form of the disease. Type 2 diabetes accounts for 90 to 95 percent of diabetes. Type 2 diabetes is nearing epidemic proportions, due to an increased number of older Americans, and a greater prevalence of obesity and sedentary lifestyles. 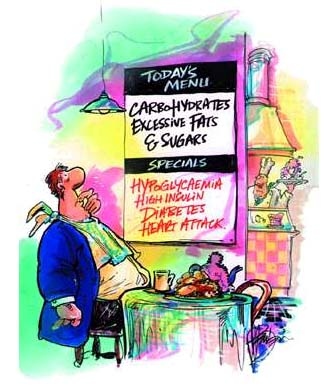 cause life-threatening complications. Type 1 diabetes can result in diabetic coma (a state of unconsciousness caused by extremely high levels of glucose in the blood) or death. In both Type 1 and Type 2 diabetes, complications may include blindness, kidney failure, and heart disease. Diabetes can cause tiny blood vessels to become blocked; when this occurs in blood vessels of the eye, it can result in retinopathy (the breakdown of the lining at the back of the eye), causing blindness. Diabetes mellitus is the leading cause of new cases of blindness in people aged 20 to 74. When diabetes affects the kidney it is called nephropathy (the inability of the kidney to properly filter body toxins). About 40 percent of new cases of end-stage renal disease (kidney failure) are caused by diabetes mellitus. Blockages of large blood vessels in diabetics can lead to many cardiovascular problems, including high blood pressure, heart attack, and stroke. Although these con ditions also occur in nondiabetic individuals, people with diabetes are two to four times more likely to develop cardiovascular disorders. Diabetes mellitus may also cause loss of feeling, particularly in the lower legs. This numbness may prevent a person from feeling the pain or irritation of a break in the skin or of foot infection until after complications have developed, possibly necessitating amputation of the foot or leg. Burning pain, sensitivity to touch, and coldness of the foot, conditions collectively known as neuropathy, can also occur. Other complications include higher-risk pregnancies in diabetic women and a greater occurrence of dental disease.

Diagnosis and Treatment Diabetes is detected by measuring the amount of glucose in the blood after an individual has fasted (abstained from food) for about eight hours. In some cases, doctors diagnose diabetes by administering an oral glucose tolerance test, which measures glucose levels before and after a specific amount of sugar has been ingested. Another test has been developed for diabetes which looks for specific endocrine disruptors (substances that attack glands and organs and prevent them from functioning properly) present only in persons with diabetes. Once diabetes is diagnosed, treatment typically consists of controlling the amount of glucose in the blood and preventing complications. This has been accomplished through regular physical exercise, a carefully controlled diet, and medication. Now, there is a new approach that people might not be aware of, based on specific disruptors that have a tendency to block the pancreas cells and the cells where insulin is transfered to (insulin receptor sites). Fortunately, we now have Body Restoration Technique, a fairly new method of determining whether a person has these disruptors in their body. If Endocrine Disruptors are found to be disturbing the pancreas and it's hormones function, they can also be removed via this revolutionary technique.

In order to control insulin levels, people with Type 1 diabetes must monitor their glucose levels several times a day. For persons with Type 2 diabetes, treatment may begin with diet control, exercise, and weight reduction, although this treatment may not be adequate. People with Type 2 diabetes typically work with nutritionists to formulate a diet plan that regulates blood sugar levels so that they do not rise too swiftly after a meal. Regular exercise helps body cells absorb glucoseeven ten minutes of exercise a day can be effective. Diet control and exercise may also play a role in weight reduction, which appears to partially reverse the body's inability to use insulin. For some people with Type 2 diabetes, diet, exercise, and weight reduction alone may work to help control high blood sugar levels. If this regimen is ineffective, a person with Type 2 diabetes may need to check to see if endocrine disruptors are affecting the pancreas and other glands that the pancreas communicates with.

Scientists hope to identify the environmental factors that trigger Type 1 diabetes in people with a genetic predisposition for the disease. Researchers attribute most cases of Type 2 diabetes to obesity. Studies show that the risk for developing Type 2 diabetes increases by 4 percent for every pound of excess weight a person carries. Researchers are investigating the exact role that extra weight plays in preventing the proper utilization of insulin and why some overweight people develop the disease while others do not. As more and more complicated incidents of diabetes occur, we are seeing an ever increasing discovery of endocrine disruptors disturbing the pancreas.

New methods for accurately measuring blood glucose levels may improve the quality of life for many individuals with diabetes. New techniques include the use of laser beams, infrared technology and BRT treatments. For example, a technique Body Restoration Technique (BRT) that determines whether a person has Endocrine Disruptors (ED) can be used on a patient to determine if these disruptors are blocking the pancreas cells, as well as the cells on the other end of the communication line - the cells that insulin attaches to (insulin receptor sites). A hormone's job is to send a message to another part of the body to perform a certain task. The end where the message is supposed to be received may be where the problem arises. The problem is that most clinics concentrate on the place where the hormones are being produced rather than where the message is being received. The Endocrine Disruptors (ED) end up damaging these receptor sites. Perhaps the biggest ED is ARSENIC. This substance is very common as it can be found in our water supply, foods, and in cigarettes. It has a great affinity for the pancreas. It 'locks' this gland up and can then effect a person's blood sugar level.

Insulin is manufactured in a part of your pancreas called the islets of Langerhans. As the sugar in your blood goes up, insulin rushes forth and converts a portion of that glucose to glycogen, a starch stored in the muscles and the liver and readily available for energy use. If all the glycogen storage areas are filled, and there is still more glucose in the blood beyond that which the body needs to function, insulin will convert the excess to fatty tissue called triglyceride, which we carry on our bodies as the main chemical constituent of adipose tissue (fat). Thats why insulin has been called "the fat-producing hormone."

You see, insulin has a dark side and a light side. In the proper amount, it is life sustaining. It promotes muscle building and prevents muscle breakdown. However, too much of it causes problems. Reams of scientific studies show that excess insulin is a factor in obesity, high blood pressure, heart disease, and other life-threatening diseases.

GLUCAGON, is another hormone which gets damaged from Endocrine Disruptors. Glucagon counteracts insulin and neutralizes it. When you eat protein it will increase glucagon in your body. Which means that protein helps burn fat via this hormone (glucagon). BRT can help make glucagons more available to the body to control insulin levels and fat burning.

Send Us An Email Today!

Find us on the map

Find Out When We Are Open